Ditch Your Stale CTA – 4 Steps to Crafting for Response

The best example of a failed call-to-action (CTA) I have ever seen wasn’t a CTA. It was a scene in the famous 1967 Mel Brooks film, The Producers. Max and Leo (played by Zero Mostel and Gene Wilder) are on the edge of their seats – waiting for the mass walk-out every bad play sees at intermission. Instead, they are met with joy and laughter.

You see, Max and Leo wanted to produce a lousy play. They lined up a terrible script. They found a flouncy director. They picked an unethical and taboo subject for the time (aka Hitler). 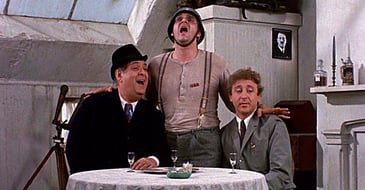 Because their lead actor’s antics changed the message of the play.

No, you aren’t producing a play (Unless you are. In which case, please tell me more!) But marketing is in many ways a form of paid entertainment.

And your CTA is the lead actor in your production – ultimately determining success or failure. So how can your bank or credit union avoid a The Producers level snafu?

Here are four steps you can use to craft a CTA designed to pull results.

In The Producers, Max and Leo had ALMOST everything right (or, rather, purposefully wrong). They had the audience profile. They had their intent aligned. They had introduced value to the market. But they didn’t have the right lead. Don’t be Max and Leo. Remember these four steps the next time you are crafting a CTA.