It is the dead of night and the sounds of revelry have long since quieted to a distant susurrus. Standing tall amidst the remnants of celebration, illuminated as if a statue to victory, looms a wooden statue built to represent the city’s emblem. A soft scrape breaks the silence and suddenly, from the belly of the structure drops first one man, then several more. They converse briefly before splitting up to head toward the gates.

The story of the Trojan Horse has long been ingrained in Western culture. Immortalized in Homer’s Odyssey and later in Virgil’s Aeneid, the tale has been retold across literature and cinema. Today the Trojan Horse is synonymous with cunning, intrigue, and infiltration. The computing world has even dubbed an entire sector of malicious viruses after the well-known figure – specifically those designed to disguise themselves as legitimate software or mislead users as to their true purpose. For marketers, this timeless tale has a great deal to tell, even beyond its iconic deception.

The Power of Storytelling

“[Stories] equalize everybody,” said Oscar Eustic, Artistic Director for The Public Theater. “Kids can enjoy Shakespeare just because they are following the story.” 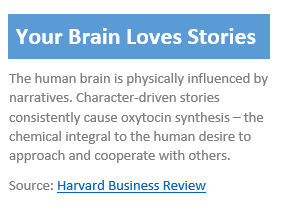 Historians tell us storytelling has been around since the start of human existence – that it is an intrinsic human characteristic. It is believed that, even before the development of verbal languages, early hominids shared through the use of visual imagery such as cave drawings. Eventually, this tendency developed into oral traditions where stories were passed from person to person, generation thru generation. It is this very practice that provides us the opportunity to discover the tales of Gilgamesh, a famous Sumerian king…and the Trojan War.

But a story is more than simple entertainment. For human civilization, it was a way of teaching lessons, instilling social norms, and growing social cooperation. What may now be considered a children’s tale such as the tortoise and the hare, in which a rabbit takes its speed for granted and is beaten in a race, are purposely memorable while containing a moral message. The story is memorable because it is ridiculous. But there are multiple lessons packed in this extremely short and silly fable.

Neuroeconomist Pal Zak has performed extensive research on the “Why” behind the human drive to communicate through stories. A decade ago, his lab found that a well-constructed story causes the brain to release oxytocin, a chemical directly linked with the human desire for cooperation and empathy. When elevated levels of oxytocin are introduced, the human brain is more willing to voluntarily listen, interact, and work others. Emotions, situations, lessons, and messages told within these confines are then internalized more deeply – motivating listeners to act.

Picture fades in on a quiet suburban street and a sidewalk corridor of foliage. A jogger turns the corner, making her way toward us through the trees. A quick flash of a quaint, green, craftsman-style home. Then back to our jogger, making her way down the street. “The little green house with the big porch,” says the narrator. “Tracy loved it so much, she always added a special stop to her daily jog.”

It’s only a commercial about buying a house. Why did it have such an impact?

Because it utilized the powerful vehicle of story and leveraged one or more of the other five guidelines of creating contagious content. In his book, Contagious, Jonah Berger, Marketing Professor at the Wharton School at the University of Pennsylvania, discusses his analysis and study of communication and advertising to discover what and why things are shared and remembered - distilling his findings into a group of basic guidelines.

OnPoint utilizes an important trigger in their “Jogger” ad – houses. People who are in the market for a home purchase are usually very aware of the structures around them and sure to think of the ad regularly.

In OnPoint’s “Jogger” commercial, viewers see and share Tracy’s excitement at the prospect of owning the home she has always wanted.

Someone you know needs of a home loan? Have the seen the OnPoint ad?

While moving and even house shopping are things often discussed, actual home loans (and other financial discussions) are often eschewed. OnPoint’s “Jogger” ad normalizes thoughts about mortgages in direct relation to the desire for home ownership.

OnPoint’s “Jogger” commercial was effective because housed its message – “OnPoint is your local, available, trusted source for home loans” – within a compelling story utilizing emotion and linking to a common trigger. But, most importantly, the story kept community credit union and mortgage as the foundation. To tell the story without these key elements would leave it lacking.