3 Ways You Can Keep Your New Year's Resolution

It’s the day after Christmas, and we’re in the middle of Chanukah. New Year isn’t until next week. You haven’t even considered what arbitrary, lofty goal you will spout off to family and friends when they ask about your New Year’s Resolution. 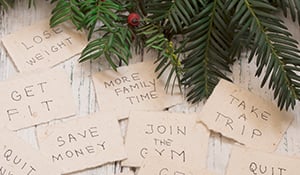 Unless your standard resolution is “I’m giving up making New Year’s Resolutions,” you probably haven’t kept one in…ever. You have never kept your New Year’s resolution. You are not alone. Most attempts to follow through with resolutions fail by January 12th, according to a study by Strava.

It’s a sad statistic considering most people look at the New Year as an opportunity to improve their health by getting out of debt, improving their financial situation, eating healthier, or getting more exercise. But the real issue is not the creation of the goal itself; it is the strategy most people use to follow through.

If Bob tells everyone his New Year’s Resolution is to lose weight, he’ll probably pick up a gym membership or go on a strict diet starting January 2nd. By January 12th, he has made it to the gym two or three times, where he was surrounded by equipment and fitness enthusiasts to whom he keeps unconsciously comparing himself. His diet has him eating mostly salads.

As a result, he is always hungry and desperately wants a hamburger. He lost maybe three pounds of water weight in the past couple weeks, and really, is it worth being thinner if it means eating salad all the time and being judged by people every time you walk into the gym?

You don’t have to be Bob this year. Here are three ways you can work to keep your New Year’s Resolution:

While the majority of people are calling it quits by January 12th, you don’t have to be one of them. Rather than arbitrarily picking a big goal, follow these steps to think it through, create a plan, and generate a system of reward. New Year’s Resolutions are usually about improving quality of life through healthier physical and financial choices. Set your goal thoughtfully this year and keep it!